Ok, so in the excitement over Jack and Sophie’s possible homecoming earlier this week, I neglected to update their stats for their 8 week/36 week birthday. Now that the trips have all settled back in for a few more days at the NICU (and that we’re halfway to the 9/37 week mark), I’ll fill you in!

Other milestones: lying flat in the bassinet, passed the car seat test

Other milestones: lying flat in that bassinet! 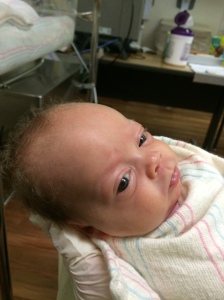 Breathing: Pretty much mastered! Except when she’s eating…

For those of you with betting personalities, I hope you put your money on Henry for this race, because once he started feeding by mouth, he quickly took the lead! Henry has been deemed the “strongest feeder” finishing his bottle with Dad last night in under 7 minutes, with nary a forgotten breath along the way. He was a champ when Nana fed him for the first time yesterday!

Jack WAS the leading candidate initially, but we’ve begun to notice that you really have to catch him while he’s awake. When he is (yesterday afternoon, for example), he’s a fast feeder like Henry. All business and finished in under 10. Now we’re just working on consistency.

Miss Sophie is still taking her time sorting out this whole sucking, swallowing, breathing thing. In the course of one “meal” she will pace herself for half the time. She’s a bit inconsistent about which half she’ll take charge of, so she keeps you on your toes! She’s still having about one episode of desatting per feed, but we are starting to get her feeds down from 30-45 minutes to about 20. Her feeding faces are still priceless.

Luckily, they all get to practice this whole feeding thing eight times a day, so we are hopeful they’ll all have it mastered soon!

There is little new to report today (and no photos!) so how about a Throwback Thursday set of photos? 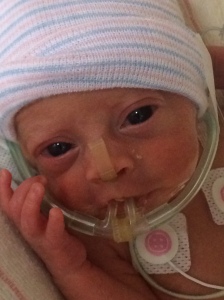 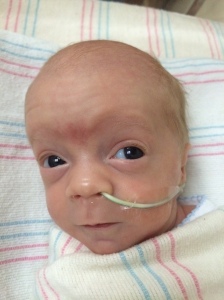 I cannot take credit for the title of this post. Marie, one of our NICU nurses coined that phrase, and it stands for the blips preemies sometimes experience (“pranks” they “pull”) on or just before they are due to be discharged. For example, a preemie who has been feeding well for a few days might suddenly “decide” he’s not going to suck or breathe, resulting in a desat and a falling heart rate or Brady (ahem, Jack).

That said, the countdown is still on. Nobody will be coming home tomorrow (Thursday), but the homecoming is still in our sights! Jack and Sophie passed the car seat test (overachievers at Day 57), but dear Henry is not quite ready for the ride. He is, however, a pretty decent eater, outperforming his sister on several occasions in the last few days. And tackling this whole sucking/swallowing/breathing business quite a bit faster than his siblings, I might add! Feeding tube is out!

In any event, it seems the triplets are not willing to leave one another behind. So, together they’ll stay for at least one more day. In the meantime, here they are, swaddled by Dad and ready for bed!

The countdown is on! Some of us might be coming home on Thursday! After 8 weeks, it all feels sort of sudden, believe it or not. But, feeding tubes are out for Sophie and Jack, CPAP is gone, and the carseat challenges have begun. For those of you unfamiliar with the “Carseat Challenge,” it is not a part of the Real World/Road Rules competition (sorry, EKW). It’s when the small preemie baby attempts to sit in his or her carseat for an extended period of time (about an hour) without any breathing episodes. 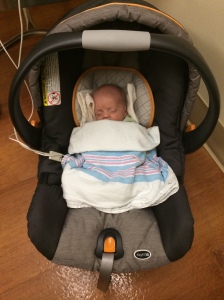 Jack, first-born, first-fed, was first up.

At 36 weeks gestationally, these adorable nuggets will soon reside at home with us. Watch out, world!