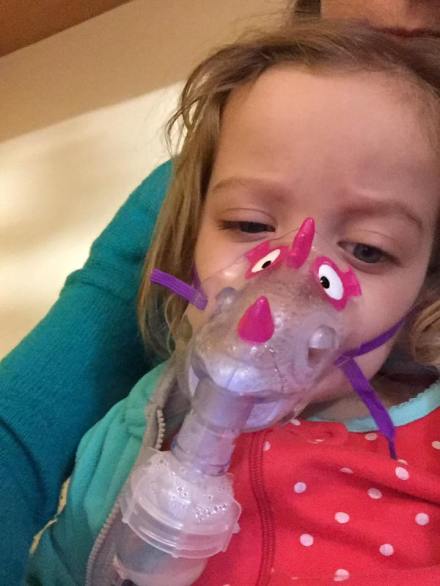 You would think I’d be an expert at this by now. Counting her breaths, recognizing retractions, knowing when it’s just congestion and when it’s something much worse. You would think, after 67 days in the NICU, watching them learn to breathe on their own, I would have faith in her little lungs. You would think, after weeks of staring intently at their monitors, willing their oxygen saturation levels higher when they dipped, and feeling helpless and terrified when they didn’t, I would be used to this.

The first time she seemed to be struggling was Labor Day last year. We were out at Nana and Grumples’. She went to bed one night with sniffles and woke up the next morning lethargic and struggling to breathe. We went to the ER, and the suspicion was pneumonia. A chest x-ray, some monitoring, and a prescription for antibiotics, and we were discharged. We never did figure out if it was really pneumonia, and it probably wasn’t. But it’s hard to shake the memory of positioning your screaming two-year-old daughter for a chest x-ray and then backing away while they take the picture.

Next up it was Halloween. Again with the sniffles. And then a trip to the pediatrician, a round of steroids, and a mad dash around Manhattan in search of the right nebulizer in time for our weekend at Nana’s. Sophie’s “panda medicine” we started to call it.

There was another bout in November. Always counting breaths, filming her as she inhales and exhales, hoping for a virtual diagnosis from Aunt Hartley.

And then, in March, another trip to the ER, and they couldn’t get her oxygen levels back up. An overnight stay in the Peds wing. Quarantined because of the rhinovirus (read: “cold”) that had started it all. Around the clock nebulizer treatments. Another round of steroids. A new inhaler (this time for daily use). And a new doctor (and vocab word) for Sophie: a pulmonologist.

The last time I raced her to the hospital (August), it turned out to just be a cold, a fever, and a double ear infection. And yet the five minute drive to the hospital with her strapped in the back where I couldn’t hear her, couldn’t touch her, were five of the scariest minutes of my life.

This little girl who kicked ass at breathing in the NICU can be (and often is) completely knocked down by a common cold. She missed her first soccer class today. Earlier this summer she missed camp, playdates. This school year hasn’t even begun, and I am already wondering just how often she’s going to have to stay home.

The alarm is set for the 1:00am dose of albuterol, but she tiptoed in here a little before 11:00, breathing fast and loud. Two puffs of her inhaler and she crawled into our bed. Scooting over to pat the pillow where she wanted me to lie.

And so tonight, I lay here, with Sophie pressed against me. Close enough so that I can hear and feel her breathing. Cell phone at the ready, stopwatch app open. Counting her breaths. Listening for wheezing. And looking for retractions. Hoping that tonight will not go down in the books as the “umpteenth” time we went to the ER, because unfortunately at this point, I am starting to lose count.

One thought on “Breathing Battles”