This year, instead of toys or games or clothes, I opted to give Henry, Jack and Sophie each an experience for Christmas. Our apartment is overrun with art supplies, pony beads, Paw Patrol figures, and PJ Mask figurines. I am constantly picking up markers, stepping on pony beads, or trying to find the missing puzzle piece for one of our seven thousand puzzles. Don’t get me wrong. Henry, Jack, and Sophie are lucky to have all of these wonderful toys, and I am grateful for a closetful of project to do, costumes to try on, or games to play on these frigid winter weekends. We have some favorite family games like Kids on Stage, Disney Candyland, Zingo, and any of the five memory games we have acquired. We could spend ALL day building with Magna Tiles and Legos. And their brand new Paw Patrol Lookout and PJ Mask Headquarters (Thanks, Nana!) have led to countless hours (yes, hours!) of fun.

But my favorite weekend activities are our weekend adventures.

Usually, our weekend adventures look like this: Me (or me and Will) dragging the kids around on the subway and bus, traveling in a (rather unforgettable) pack, and racing around until we get too tired or hungry and have to go home. Where we (the grownups) collapse on the couch. Henry, Jack, and Sophie look forward to the weekend all week. “Is it a weekend day?” they used to ask each morning. Now that they have a better sense of time, they say things like, “What fun things are we going to do this weekend?” and “How come we get to do all this cool stuff on the weekends?” Last weekend we hit up Barnes and Noble, Shake Shack, the New York Public Library, MOMA, and a nut-free ice cream parlor (more on that in a later post).

So rarely, however, are these adventures a one-on-one affair. Usually the child-to-grown-up ratio is three to one or three to two. And as much as I love (truly) bouncing around the burrough of Manhattan with three four-year-olds in tow, I cherish the very rare moments when we are adventuring in a one-to-one ratio. Just me and one of favorite little people.

So this year, for Christmas, I decided to make more of those memories.

Choosing what to do with each of them was a big part of the fun. Sophie was somewhat easy. When Will saw the Black Friday sale on “Frozen” tickets, it was a done deal. Giving Sophie the chance to see Elsa on stage at her first Broadway musical was a no brainer. The only hard part was picking the seats.

It seemed fitting that Henry, still obsessed with dogs, would get a chance to go to the Westminster Dog Show. (Side note: how lucky are we to live in NYC where all of this stuff happens?!?) Jack was a little trickier. It was important to me that each experience felt personal to the child but also not something that the other two would really regret missing out on. They all love PJ Mask and Paw Patrol, so there was no way I could take just one to something like that. And as far as I could tell, they don’t have “cat shows.” (Although I did just discover “Cat Cafes” and there is (of course) one in downtown NYC…another weekend adventure to plan)! Jack loves cats, he loves tigers, he loves sports, he loves drawing…I got stuck on the tigers thing a little bit. That lead me to the circus. I know they don’t have tigers at the Big Apple Circus anymore, but then I started thinking about all the things they DID have. A quick peak at a Cirque de Soleil performance with Jack rendered him a perfect candidate for Big Apple Circusing. He was mesmerized by the trapeze artists and the jugglers (Daddy can juggle too!), so we had our event.

Jack was the first to open his gift from me. I had gotten the kids ornaments to commemorate the experience 1) because even though they don’t need more stuff, not having anything to open on Christmas seemed like a bit of a bummer and 2) because that way, every year when we decorate the tree, we can remember our adventures from Christmas 2018.

It was hard to explain that his gift was a trip to the circus, and he was a little skeptical of the fact that we would be going without Henry, Sophie, or…gasp!…Daddy. Since we haven’t seen a circus yet, I think it was hard for him to imagine how much fun it  would be. Don’t worry, as the days and weeks have gone by, Jack’s excitement has mounted, and he can’t wait to see the circus!

Henry was next, and he was almost as excited about the Dalmatian ornament as he was about the prospect of going to the dog show. “Are they going to have every type of dog in the world there?” Pretty much, buddy, pretty much. He’s excited to don his new doggie sweatshirt (thanks, Aunt Lizzie!) for our trip to the Westminster Dog Show. Waiting until February 7 is an excellent lesson in patience!

Sophie was last to open her gift, but the first to experience it. It didn’t take long for her to figure out we were “going to ‘Frozen'” once she opened her Elsa ornament.

It took quite a bit longer for her to wrap her head around what that meant. Sophie has been pretty discerning about the difference between characters in movies and books and people who dress up as the characters in real life. Ask me about our trip to see the “Easter Bunny” last year. “That’s not a bunny. That’s a man in a suit!” she said. Elsa and Anna are a little more convincing, but there were still a lot of questions about who these people were, if they were the “real” Elsa and Anna, how they could be the real Elsa and Anna if they lived in Arendelle and were cartoons, etc., etc., etc.

The buildup to “Frozen” was intense. Sophie asked every day for a week, “Is TODAY the day we’re going to ‘Frozen?'” She wore her Elsa costume nonstop. She couldn’t sleep. Like I said, INTENSE. The day of, after hemming Sophie’s Elsa costume by hand (I don’t recommend this!), we hit the Q train and headed towards Times Square. 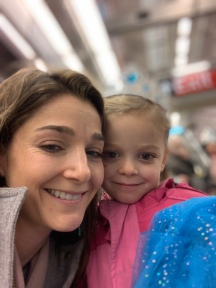 Of course, we stopped for some selfies along the way. 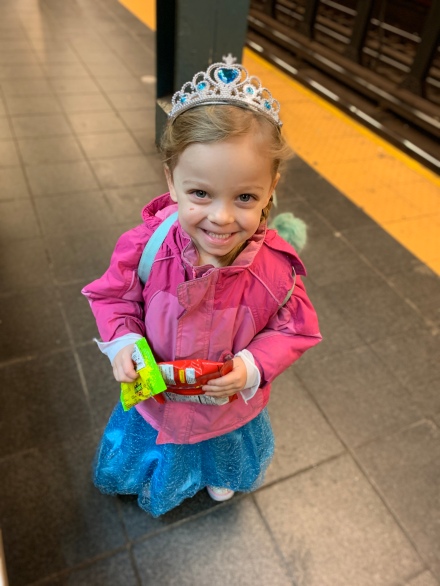 And some nut-free snacks. Sour Patch Kids and Cheez-Its. Now that’s what I call lunch.

And when we arrived in Times Square (which Sophie affectionately refers to as “Town Square” every so often), Sophie was in awe. “What is this place?!” she asked. “It is soooo cool.” The screens, the lights, the people…and even some leftover New Year’s Eve confetti littering the streets. She was eager to get right to the theater even though we had some time to wait. 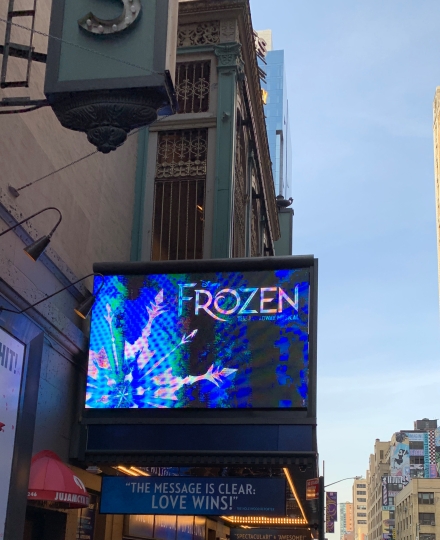 I let Sophie choose a souvenir, and surprise, surprise, she went for an Elsa doll.

When the doors opened, we grabbed a booster, found our way to our seats, opened up our Sour Patch Kids, and waited for the magic to begin.

It’s hard to describe how amazing it was to experience this show with Sophie. Our seats (in the balcony) were not great. We were pretty far away. Things were a little obscured by the railing in front. And it didn’t matter at all. Not one bit. Sophie sat, mesmerized, craning her neck every now and then, leaning over to whisper a question or two when the songs varied slightly from the movie, in total awe of the entire thing. She could have cared less where our seats were. Sophie’s camp counselors once described the way she listens to stories. “It’s like she is IN the book. She leans in, barely blinks, and is clearly rapt by every word we read.” That’s what it was like at “Frozen.” The woman sitting next to us told me at intermission, “I forgot she was there, she was so quiet!” She connects emotionally with the characters. Grabbing my arm when Anna and Kristoff begin to fall off the bridge. Bursting into (quiet) tears when Anna freezes solid at the end. Even though she knows Elsa’s love will unfreeze her eventually. Watching Sophie watch “Frozen” was the perfect Christmas gift for me too. Sharing one of my greatest loves (musical theater) with my children is such a special experience. 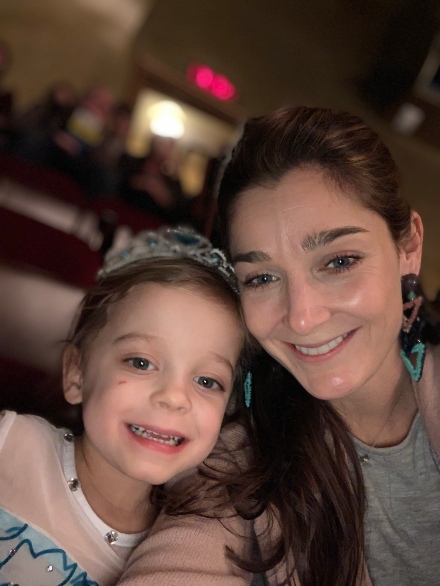 Sophie’s first Broadway show. I know they say children don’t really store memories long term until they are seven or so, but I know I will never forget the experience. And I hope that we’ll keep remembering it together, through this blog post, through the photos I took, the souvenirs we came home with, and then every Christmas season, when we hang that ornament on the tree and say, “Remember when…”

One thought on “Making Memories”